Plant a tree in memory of Jules
An environmentally-friendly option 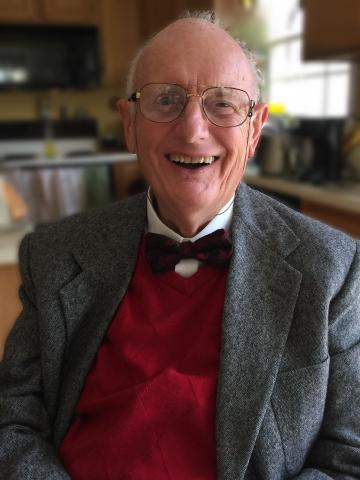 Jules Dezsö Stephen Vallay passed away peacefully in the morning hours of June 29, 2021.

Jules was born May 5, 1931, in Budapest, Hungary, the only child to Julius and Irene Vallay (née Farkas).  He attended St. Emeric Cistercian High School in Budapest and spent summers with his many cousins in the Hungarian countryside and at Lake Balaton.

When the post-World War II challenges of communism became too difficult to bear, he and his mother were to make a daring escape together by train to reunite with his father who had to escape months ahead of them.  Sadly and unexpectedly, his mother never made it aboard the train and he would not be reunited with her until her own escape during the 1956 Hungarian Revolution.  Jules, curled up in a box upon which a Russian guard spent many hours of the train passage sitting, traveled from Hungary through Austria to reunite with his father in Switzerland.  After a brief stay, Jules and his father settled in Lebanon for two years where Jules attended the American University of Beirut while awaiting safe passage to America.

Jules arrived in New York Harbor on Thanksgiving Day in 1951.  He was proud and grateful from that day on to call the United States his home.  He completed his bachelor’s degree in Business Administration from Hunter College in New York.

A devout parishioner at St. Stephen’s of Hungary, R.C. Church, in New York City, he met his beloved wife of 61 years, Martha (née Bakonyi), where they both sang in the choir.  Jules eventually became director of the 40-member Voice of Faith choir and was dedicated to the church as organist and choir director for more than 30 years.  He was honored and proud to have conducted a choral concert before a full house at Carnegie Recital Hall, and to have worked with the St. Stephen Hungarian church choir in Passaic, New Jersey.

Music was central to Jules’ life from a young age.  As a child, he took piano and accordion lessons in Hungary.  In Lebanon, he took private lessons in musical composition at the Academie des Beaux Arts.  In the U.S., he attended the Long Island Institute of Music, receiving training in choral and orchestral conducting.  He was also a member of the Pro Arte Chorale of New Jersey, a professional 180-member chorus, singing basso profundo on the prestigious stages of Carnegie Hall and Avery Fisher Hall.

Jules and Martha raised their three children – Edith, Jules, and Denise – in Hillsdale, New Jersey, exposing their children to the wonders of worldwide travel, tending to their extensive gardens, and hosting barbecues, pool and dance parties, and holiday feasts in their loving home.  Working in the travel industry for many years helped enable Jules to travel to almost every continent and more than 70 countries – a map on his office wall with pushpins marking places traveled to and just a few still waiting for his visit.

The first half of Jules’ working career was in banking and the travel industry.  He and his father worked together for a time at American Export Lines.  In 1978, Jules joined AT&T and held several positions in sales and marketing.  When the Iron Curtain fell in 1989, Jules returned to Hungary as National Managing Director of New York Telephone/NYNEX in search of new business opportunities for the company.  This was a once-in-a-lifetime chance to reconnect with Hungary and family, something that had been denied him and Martha for so many years.  Jules retired from Verizon (formerly NYNEX) in 1994.

Jules and Martha retired to Lake Monticello, Virginia, in 1995. They moved into a self-designed home filled with natural light and filled it with love.  Jules was never one to sit still even in retirement.  He was a passionate gardener (especially roses) and enjoyed attending classical concerts.  From 1999 to 2015, Jules and Martha - always doing everything as a pair - worked part-time for the Thomas Jefferson Foundation at Monticello.  And always curious, Jules spent his free time researching and writing on every subject imaginable – gardening, music, history, the meaning of life, his family, and more.  Beginning at age 12 in 1943, he maintained a daily diary until 2017 – 74 years! – a remarkable gift for many generations to come.  Many of Jules’ favorite compositions can be found on his website: www.onlysaytheword.com.

After suffering from declining health, mostly owing to heart disease, Jules passed away at the age of 90.  He leaves behind: his beloved wife, Martha; daughters and sons-in-law Edith and Frank, and Denise and Tony; and a son Jules and daughter-in-law Carol.  He will be missed by his seven grandchildren – Paul, Nicholas, Jules Thomas, Samantha, James, Lucy, and Evan – for whom he always had a joke to tell, an interest to share, an inspiring birthday message to relate, and a game of Dominoes to play.

Jules put it well when he wrote: “Life has not been as easy for us as for some others. Yet we strive to meet the high goals and standards we set for ourselves and for our children.  Our health has not been free from the demons of challenging diseases, but we count the blessings of our fruitful and productive life.  After all, roses come with thorns.”

Due to COVID travel restrictions, a memorial service is still to be finalized.

Memorial contributions may be made to the charity of your choice.  Some of Jules’ favorite affiliations included the Charlottesville Symphony and the Association of BellTel Retirees.

Finally, we are very grateful to the staff members of Hospice of the Piedmont and Rosewood Village Assisted Living who helped make Jules’ finals days as comfortable and peaceful as possible.

Plant a tree in memory of Jules by clicking here.
To send flowers to Jules' family, please visit our floral store.

A service summary is not available

Plant a tree in memory of Jules
An environmentally-friendly option

Plant a tree in memory of Jules

4 trees planted in memory of Jules

Mr Valley’s greatest gifts live on in the love and splendor of his wonderful family. What a stunning memorial that has been offered here for everyone. Peace to you all at this time. Fondly, Carol Zeller-Henderson

A Memorial Tree was ordered in memory of Jules Stephen Vallay by Deborah Kiszely-Papp.  Plant a Tree

What a fascinating and inspiring life! Thank you for this beautiful tribute and for the chance to read more of Jules S. Vallay's writings. He will always hold a special place in our hearts. It was his enthusiasm that first led me to seek out and discover the music of Ernő Dohnányi. Wishing you God's peace and comfort in your loss.

What a wonderful tribute to a great man, loving husband, father, grand father. It was a pleasure to visit with Mr. Vallay when they would come to Doylestown. He was always so interesting to talk with, a wealth of knowledge, and a kind and gentle nature. I love the photo you included, it really captured his personality! It is never easy to say goodbye and we  wish you all peace in the days ahead, and a life full of wonderful memories and lessons he leaves behind.
In love and sympathy,
Denise & Glenn Sanders

Thank you for writing such a beautiful Obituary. Although I've never met your Dad, I now feel like a part of him is with me. May you continue to keep him alive in your hearts.
Sincerely, Sal Milione

A Memorial Tree was ordered in memory of Jules Stephen Vallay by Sincerely, Sal Milione.  Plant a Tree

Plant a tree in memory of Jules